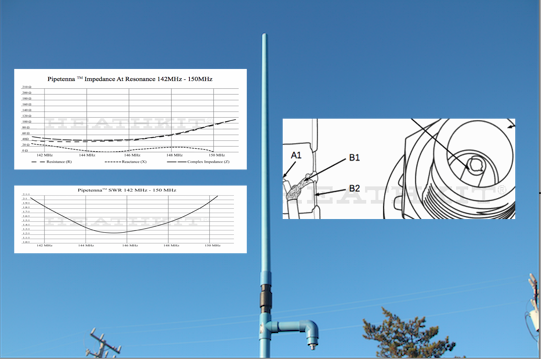 TERMS & SHIPPING: We ship most US orders via USPS Priority mail. International shipments require extra fees. When paying by PayPal, you receive our immediate email payment confirmation via PayPal, and again from us a few days later as we prepare your order. 1-year parts warranty on kits. See Terms and Shipping Policies for more details. 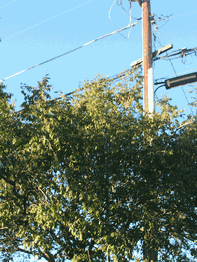 Finally. A high-performance stealth VHF/UHF antenna you can build yourself.

It's about time, isn't it. Everyone else is making antennas that look like a porcupine that chewed on an electrical cord: Wires and tophats and junk on the side and knob capacitors and counterpoises and shiny metal radials sticking out all over, and 10 feet (3 meters) long just to get 6dBi gain. You'd think they've never heard of Homeowner Associations and CC&R restrictions. Not to mention, difficult neighbors.

Compare the gain vs. height, stealth features, maintainability, robustness, learning opportunity, personal accomplishment, performance, and overall value of Heathkit PipetennaTM to anything in its price class. You'll find yourself heading right up for that Add to Cart button.

Ever try to hide an antenna?

Let's face it: Antennas today are not always popular with your neighbors. That calls for stealth. But how do you hide an antenna?

Our approach to stealth is novel. Everyone else tries to make stealthy antennas by making them short or thin. The technical term for that approach is, "design error."  What you really want in an ideal antenna is a primarily-resistive constant-impedance low-Q high-gain design. ("Q" means "narrowness." In an antenna , high Q is a design flaw.) You want a broadbanded antenna with gain, because you want to hear and be heard well (gain), but also cover the entire band without retuning (broadbandedness).

Just say no to bad antenna designs. How do we achieve this ideal antenna? The answer is, your antenna needs to be long and wide relative to its wavelength -- it needs to present a wide "RF aperture" to incoming signals. If your antenna element looks like a skinny aluminum stick, magnet wire, or worse, a coil of magnet wire, you're in trouble. Skinny little wires or stumpy little coils wrapped around a stubby tube and reactively coupled to nearby building parts are a path to narrowbanded gain-impoverished failure. Your antenna did not need to go on a diet. It needed to be set free.

The secret to stealth: Your antenna doesn't need to be stumpy or skinny; it needs to look like it's not there. At least not there as an antenna. Have you looked at your roof lately? You've got vents and pipes and all kinds of stuff on it you never notice, because they look like a part of your roof. The Heathkit PipetennaTM fits right in. Invisible in plain sight. WIthout being skinny or stumpy.

Infrastructure designed to look like infrastructure. Your radio antenna is a bit of infrastructure.  We designed Pipetenna to look like infrastructure, instead of some weird metallic science project that will alarm your neighbors. It looks sort of like: a pipe. It's the kind of thing that doesn't draw attention on a building. It's not shiny reflective aluminum: Heathkit PipetennaTM colors are muted and carefully chosen to match your home's infrastructure and the natural objects in your yard. And we do mean "carefullly chosen." Our greens were methodically color-matched to a wide range of real vegetation. Our "Bland Brown" is the color used at amusement parks to make park infrastructure disappear in plain sight. Our Sky Blue is not a guess: we color-matched it to a wide range of true sky conditions, taking into account reflectance, cloud cover, horizon haze, elevation angle, you name it. Have a tile roof? Try our Terracotta; we matched it against (you probably guessed this by now) real terracotta. And for urbanites, we have a solid-black model, because our beta testers who live in cities tell us it disappears best on an apartment roof, where neighbors might be looking down on (not up at) your antenna. Each color is carefully engineered to last for many years.

No one offers you this choice of stealth options to match your setting and needs. No one except, of course, Heathkit.

Introducing PipetennaTM: An antenna for all seasons.

And we're not kidding.

Heathkit PipetennaTM is a high-performance stealth VHF/UHF antenna you can build yourself.

No radials. No radials. No radials. Radials sticking out of a rooftop-mounted antenna make it look like, well, an antenna. We think antennas are beautiful too--but do your neighbors like looking at them? How about the President of your HOA, or the local (cough) busybody? Wouldn't you prefer they never notice your antennas? So: Did we mention, no radials? (No, not all vertical antennas need radials, just the compromise antennas you had to choose from until now.)

PipetennaTM: It's high-performance. About 6 dBi gain on 2m, omnidirectional, at a length of only five feet (1.7m). Just about flat SWR  -- 1.5:1 or better across the entire 2m band when assembled as directed. Darned good on 440MHz too. Check out the specs below.

Clever enough to be patented. No kidding. The patent filings are already in, for US and international coverage. You wouldn't believe the number of inventions in this little antenna. Not to mention the other antennas we have coming to you soon.

Exceptional manufacturing quality. Let's face it: There's no shortage of junk and corner-cutting in the market. Imagine the opposite: That's Pipetenna.TM It uses only the highest-quality name-brand coax and connectors. Housing components have carefully chamfered edges for ease of assembly. Coax pass-throughs are specially offset-milled to minimize stress on coax. There's no metal assembly hardware to sieze, spall, rust, or fail, and no exposed metal to corrode. The choke is weatherproofed. We use an N-type connector, which is watertight and electrically stable and eliminates any impedance bump: 50 Ohms presented to a transmission line should be 50 Ohms, today and tomorrow, on VHF and UHF, and water shouldn't leak into your coax from a low-quality connector. And this antenna is waterproof. Yes, waterproof. It actually can be used on a boat, or near the ocean (where we are), even submerged without corrosion or damage for that matter. In short, every detail has been attended to.

This thing is built to last. We've tested it for over a year at our antenna range in the Cascades Mountains of the Pacific Northwest. (Why a whole year? Because years have seasons, and weather follows seasons.) PipetennaTM has routinely survived snowstorms, and summer heat, and lashing rain in gale-force winds. As for survivability assessment: We don't just compute a theoretical windload based on normalized surface area. We engineering stress-test it, measuring angular displacement applying varying mass correlated to windload, until it finally breaks. (Believe us, it takes a whole lot of force. Don't try this at home.) Your PipetennaTM might or might not survive a major hurricane on your roof; but then, neither would you. Nor will your roof, for that matter. Again: Engineered for reliability, built to last.

Now let's look at some numbers.

These are the actual measured resonance (impedance) and SWR charts for a real properly-assembled Pipetenna. 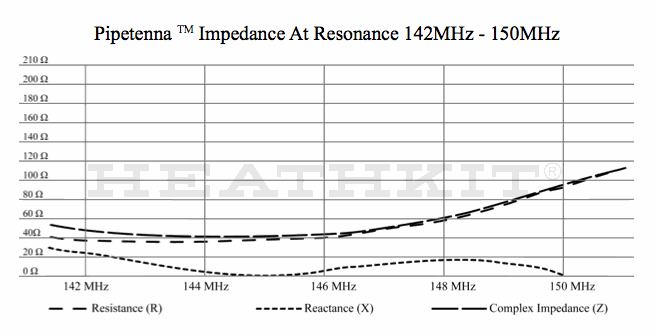 Resonant mid-band. 50  (+/- 10) Ohms, mostly resistive, for the entire 2m band. No sharp resonance peaks, meaning: No retuning, no getting stuck in just part of the band, no de facto limitations by mode, and no sharp SWR rise that causes transmission line loss at VHF/UHF where your coax already is challenged enough.

Check this out. You already saw complex impedance hovers around 50 Ohms, right where you want it. Now add this chart. That's a 2:1 SWR bandwidth of about 8 MHz -- twice the width of the entire 2m ham band! Within-band, it never exceeds 1.5:1. This keeps your transmitter happy. Don't you wish all your antennas were this good?

That peak at 425MHz is about 3:1. (The low at 445MHz is 1.6:1.) So as built/tuned in standard configuration, your PipetennaTM has a SWR of 2:1 or better for the entire 12MHz wide region from about 438-450MHz, and no dire mismatches everywhere else on the entire band. Smooth.

Here are the specs.

(Or don't: Tune it for your special needs. It's your antenna.)

But these give you the idea.

Admit it. It's classic. Good in forests too.

Magic for your own kingdom. Just disappears.

Really. Our skies here are this color. We checked.

For large (e.g. club) orders in a special color, call us. We have a large palette. Minimums apply.

AVAILABILITY AND SHIP TIME: Many colors may be backordered due to overwhemling demand. Backordered colors may ship in 4-8 weeks.
Colors avaliable for shipping in about one week are:    SkyBlue, OliveGreen

We update this list regularly during the week. We'll notify you when your order ships.

Beautiful--and helpful--line art drawings are a hallmark of every Heathkit manual. Including, of course, your Heathkit® PipetennaTM manual.

Best of all: It's a Heathkit.

All this antenna, and you get to build it too.

Maybe you were wondering. Will I really have the classic legendary Heathkit build experience?

We have one word for you:  Yes.

Your PipetennaTM kit includes a full assembly manual that's dozens of pages long. Parts lists. Checklisted for every step. Testing procedures. How to experiment. Troubleshooting. References. And more: Links to our website. And that's just the beginning.

Yes, you get to solder.

Too many antennas--too many kits, really--are just wrist exercise: Attach some bolts, and that's about it. Not your PipetennaTM. You'll solder and assemble and tune and test your PipetennaTM, step-by-step. When you're done, you'll know exactly what's in it, what its performance data are, how to test it, how to tune it, and how to replace parts, because you built it.

Do we assume you know how to solder or test antennas? No: It's a Heathkit, and we teach you. We just assume you're pretty smart. (Which we already know, because, well, here you are.) We take care of the rest. Well-labeled parts, clear diagrams, detailed step-by-step instructions... and in the end, a great product you'll use regularly for years to come.

OK, it's time to build a Heathkit.

You know you want one.

So head on up to the top of the page, and choose the best antenna color for you.

(We really do like Heath Green, by the way. Maybe it's just us.)

See you again up above, at Add To Cart.
Heading up there now ourselves...